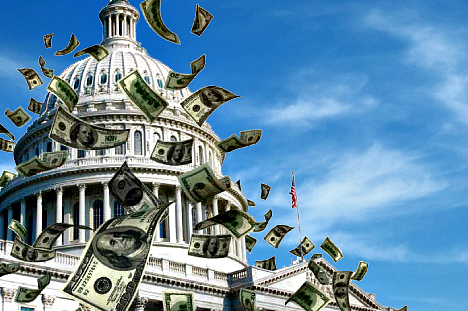 Fiscal PolicyPolicy CornerVendettas of the Week

Of the many ethics scandals that have clouded the image of Congress over the years, perhaps none was more illustrative of an out of control legislature than a small bridge in Alaska. First approved in 2005, the $223 million bridge between sparsely populated Ketchikan and Gravina Island, Alaska earned the national nickname “the Bridge to Nowhere” and was a flashpoint in a national outcry against congressional earmarks[1] and excess spending overall. In addition to its high cost, it was also controversial as the money partly came from Hurricane Katrina relief funds. As public outrage put its power behind ethics-minded reformers and lawmakers fighting to reduce government spending and the national debt, the presidential campaign of John McCain began to focus hard on eliminating earmarks as part of his plan to reduce government spending. Earmarks, in short, are funds provided by Congress for projects, programs, or grants that are written into statutes, reports, or other communications that directly spends money rather than being budgeted to the executive agency tasked with implementing the law. For instance, a clause in the next must pass defense or farm bill that allocates $50 million for a school refurbishment in a key Senator’s state would be considered an earmark. Despite McCain losing in 2008, Republicans were able to take the House in 2010 and pass reforms eliminating congressional earmarks. However, a group of Republicans, after Donald Trump ran on a campaign of “draining the swamp”, want to bring earmarks back[2]. Although the vote was delayed by Paul Ryan and other anti-spending members of congress[3], it’s worth looking back at the last six years and seeing what eliminating earmarks has actually done.

Since the elimination of earmarks:

The elimination of earmarks has created a political environment in which gridlock has become more widespread as one of the keys to congressional and cross-party compromise has been eliminated. While ethics reformers and some deficit hawks may be pleased with the attempt at congressional restraint, eliminating earmarks has created a political vendetta between incentivizing compromise and the need to maintain fiscal order.

Fortunately, the solution to this self-imposed, symbolic roadblock is simple: repeal the earmark ban. Doing so would free up one of the major ways congress is able to achieve compromise and govern because, once again, a congressperson who might not have been comfortable voting for a bill has the cover to go back to their district and brag about the new, often needed, project that bill provided funds for. Though proponents of eliminating earmarks might say that the gridlock is more a function of an increasingly polarized Congress rather than eliminating earmarks, earmarks performed a necessary function in allowing congresspersons to be more flexible with legislation they are reluctant to support.

For instance, between 2011 and 2015, many bills passed out of the Senate went to die an early death in the House because despite there being enough votes to pass, House leadership refused to bring them to the floor for a vote. In fact, during that time, the number of substantive bills passed in the final year of a congressional term has fallen from a high of 190 in 2007-08 to 124 in 2013-14. Over the same time the number of ceremonial bills passed fell from 133 to 41. [4] Now imagine House Democrats convincing enough House Republicans with strategic earmarks to work around John Boehner, the Speaker of the House at the time, and bring a bill to the House floor using a release petition, a procedural action where a majority of congresspeople request a vote on a bill. Sure, not every bill would get a vote that way, but perhaps bipartisan immigration reform could have been brought to the floor (it had the votes to pass) since only Boehner stood in the way.

However, with any policy, the devil is in the details. I am not blind to the concerns of ethics reformers. There are cases in which earmarks have turned into bribes and there are always concerns about very stupid earmarks as the infamous bridge to nowhere proved. A return of earmarks must also include transparency on the source and the nature of such earmarks. It is also true that reinstating earmarks will, by definition, increase spending, and, with our annual deficit at roughly $500 billion, many financially-conservative legislators and citizens will balk at the return of such spending. However at their peak in 2005, earmark spending only totalled just under $19 billion[5], which is roughly the amount given to run NASA. As I see it, a return of governability and compromise is well worth the budget of NASA[6].

If we are to return congress to a state where it can actually govern, it is imperative that we eliminate the largely symbolic roadblocks to governance. Since earmarks are generally unpopular to support, there are no major organizations advocating their return, it is now incumbent on the public to demand that congress stop taking symbolic action towards ethical and fiscal correctness. If you want a return of compromise and governance on Capitol Hill, you need to notify your congressman, letters, emails, the capitol switchboard, all can be of great use in demanding that Congress start governing again.