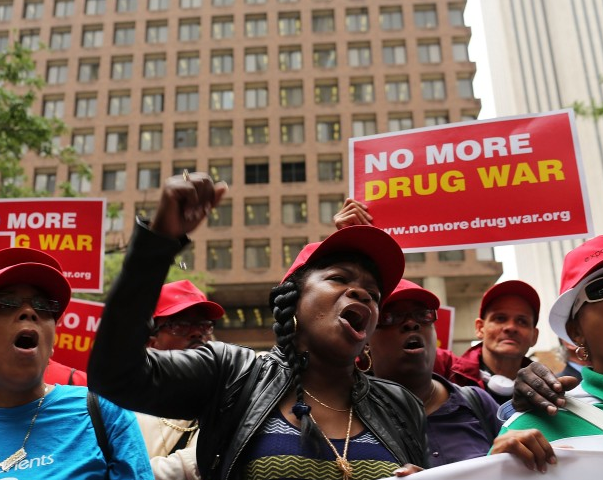 The Failing War at Home 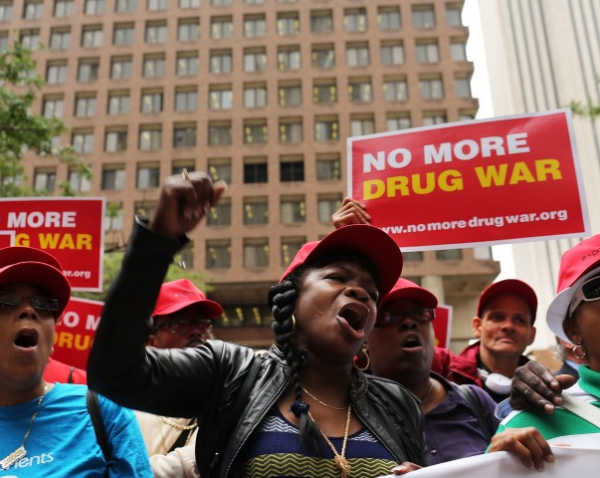 Forty years ago, in June 1971, President Nixon declared a “War on Drugs.” And forty years after, the U.S. continues to fight, with no signs of the war coming to an end. Instead of a drug free nation, the United States, which comprises five percent of the world’s demographic, currently holds twenty-five percent of the world’s prison population. This rather high statistic can be traced back to the 1980s, when the U.S. prison system experienced a dramatic increase due to tougher drug laws. [ref] Kathleen Miles, “Just How Much The War On Drugs Impacts Our Overcrowded Prisons, In One Chart,” Huffington Post, March 10, 2014, Accessed May 8, 2015, http://www.huffingtonpost.com/2014/03/10/war-on-drugs-prisons-infographic_n_4914884.html. [/ref] Although African Americans constitute only thirteen percent of the U.S. population, the group comprises thirty percent of arrests for drug violations, and forty percent of incarcerations in state or federal prison for drug law violations.[5] And as the prison population increases, the taxpayer continues to incur high costs as well. Indeed, over the past four decades, Americans have paid approximately one trillion dollars in prison expenses. Taxpayers in New York City, for instance, pay $168,000 per inmate annually. [ref]Marc Santora, “City’s Annual Cost Per Inmate Is $168,000, Study Finds,” The New York Times, August 23, 2013, Accessed August 23, 2013, http://www.nytimes.com/2013/08/24/nyregion/citys-annual-cost-per-inmate-is-nearly-168000-study-says.html [/ref] With such troubling statistics resulting from the “War on Drugs,” the vendetta is alleviating prison overcrowding in an innovative manner that produces benefits to the U.S., instead of further burdening the system.

Having experimented with prohibition of alcohol in the 1920s, the federal government continues this specific policy, banning the sale, production, importation, and transportation, of illegal substances. According to the National Bureau of Economic Research, the first few years of prohibition’s enactment resulted in a drastic decrease in alcohol consumption. [ref] Jeffery Miron and Jeffery Zwiebel, “Alcohol Consumption During Prohibition,” NBER Working Paper Series, 1991. [/ref] However, alcoholic use rose sharply back to pre-prohibition levels soon after. Moreover, prohibition in the 1920s sparked the rise of bootleggers and notable criminal organizations headed by the likes of Al Capone. Likewise, history has repeated itself, as modern day drug laws have generated an “underground” market, where various gang groups and drug cartels attempt to monopolize, in hopes of seizing wealth and power. [ref] Tim Nash, “Organized Crime in the 1920’s and Prohibition,” The Finer Times, Accessed May 8, 2015, http://www.thefinertimes.com/20th-Century-Crime/organised-crime-in-the-1920s.html. [/ref] Although the federal government, according to Journalist Serena Dai, continues to increase an astounding amount, even reaching the trillions, the addiction remains constant. [ref] Serena Dai, “A Chart That Says the War on Drugs Isn’t Working,” The Wire, October 12, 2012, Accessed May 8, 2015, http://www.thewire.com/national/2012/10/chart-says-war-drugs-isnt-working/57913/. [/ref] Indeed, data from both studies suggest that prohibition laws in general do very little to restrain people from partaking in alcohol and drug related substances. But despite this evidence, the Obama Administration currently has requested 25.4 billion dollars from Congress, in order to fund various programs that focus primarily on drug prevention. [ref] Tina Chen, “Baby in Coma After Police ‘Grenade’ Dropped in Crib During Drug Raid,” ABC News, May 30, 2014, Accessed May 8, 2015, http://abcnews.go.com/blogs/headlines/2014/05/baby-in-coma-after-police-grenade-dropped-in-crib-during-drug-raid/ [/ref]

Since prohibition laws seem ineffective, perhaps the best solution is to simply treat America’s drug problem like a public health issue rather than a crime. The London School of Economics’ IDEAS Center published an eighty-two page report entitled, “Ending the Drug Wars,” which analyzed the “high costs and unintended consequences” from prohibition based drug laws, and its effects on public health and safety, national security, and law enforcement. [ref] Matt Ferner, “End The War On Drugs, Say Nobel Prize-Winning Economists,” Huffington Post, May 6, 2014, Accessed May 8, 2015, http://www.huffingtonpost.com/2014/05/06/end-drug-war_n_5275078.html. [/ref] Endorsed by five Nobel Prize winning economists, the report concluded that the U.S. should end the “War on Drugs,” and move from “mass incarceration to public health and human rights.” The federal government should also consider legalizing specific drugs, which can bring monetary benefits as well. In Colorado, for instance, the state legalized marijuana, which in turn, increased tax revenue by $53 million dollars within the first year, along with medical marijuana, which brought $16 million dollars in tax revenue. [ref]Katie Lobosco, “Recreational Pot: $53 Million in Tax Revenue to Colorado,” CNN Money, February 12, 2015, Accessed May 8, 2015, http://money.cnn.com/2015/02/12/news/economy/colorado-marijuana-tax-revenue/. [/ref] Washington State also legalized marijuana, which resulted in various marijuana businesses who have partnered with famous celebrities, such as Tommy Chong. [ref]Carol Tice, “Comedian Tommy Chong’s Plan To Become Legal Pot’s Sam Walton,” Forbes, December 11, 2014, accessed May 8, 2015,  http://www.forbes.com/sites/caroltice/2014/12/11/comedian-tommy-chongs-plan-to-become-legal-pots-sam-walton[/ref] Moreover, allowing small businesses to sell drugs takes away the monopolizing power currently controlled by the cartels.

American citizens can make a change by pressuring their government, whether it be federal, state, or local, to decriminalize drugs and end Nixon’s “War on Drugs.” The Drug Policy Alliance, an organization dedicated to ending the “War on Drugs,” provides a petition that can help U.S. Veterans access medicinal marijuana. In addition, the 420 Petition is an organization dedicated to legalizing marijuana in general. The group’s website even allows individuals to create videos, and share opinions on marijuana. Sign a petition today to let the government know that the American people want change.