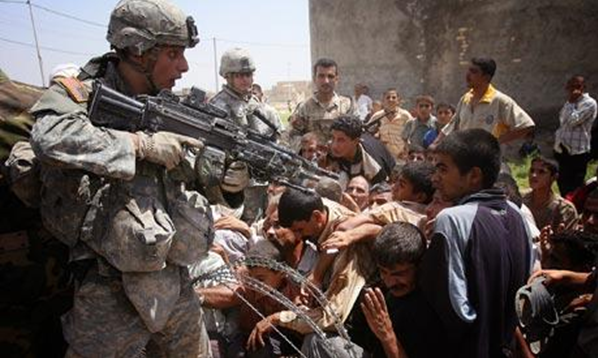 In recent news, President Barack Obama reported that he was open to expanding the “America military footprint in Iraq,” by adding bases and hundreds of troops in order to “support Iraqi security forces” in their efforts to combat Islamic State.[ref]Peter Baker, Helene Cooper, and Michael Gordon, “Obama Looks at Adding Bases and Troops in Iraq, to Fight ISIS,” New York Times, June 11, 2015, accessed July 5, 2015. http://www.nytimes.com/2015/06/12/world/middleeast/iraq-isis-us-military-bases-martin-e-dempsey.html?_r=0[/ref] Even if Obama manages to expand military footprint in Iraq, the cost for it would seem minute compared to the costs for the other eight-hundred plus American bases around the world. [2] Since World War Two, the United States has been intervening in the affairs of other countries – sometimes in the name of foreign aid, such as Haiti and Sri Lanka after these nations experienced natural disasters, and sometimes for ulterior motives, like protecting U.S. oil interest in the Middle East. This resulted in America’s military expanding to the far reaches of the globe.

U.S. military expansion may be intended as a preventative measure against threats to national security However, according to Robert Pabe at the University of Chicago, military expansion could be creating more threats. Indeed, Pabe collected comprehensive data on every suicide terrorist attack since 1980. [ref]”What Really Causes Terrorism? It’s Not Your Freedom,” Think by Numbers, January 17, 2012, accessed July 5, 2015, http://thinkbynumbers.org/terrorism/suicide-terrorism-statistics[/ref] The statistics revealed that ninety-five percent of suicide terrorists’ attacks are done against foreign soldiers by “organized, coherent campaigns” against occupying foreign troops. This, in turn, supports the idea that U.S. presence in these countries creates hostility. With these statistics, the vendetta is how can the American government can protect their interest, and relieve conflict around the world, while avoiding these negative consequences?

American military intervention, regardless of the intention, has often made problems worse. In eastern Congo, for instance, the U.S. provided support to Congolese military operations, in hopes of saving women from abusive rebels. What resulted was an “epidemic of rape,” which had grown worse ever since U.S. deployment. Even though rape was already growing problem in Congo before American deployment, it nearly tripled when the U.S.-led operations started. Money and guns were simply sent to aid Congolese soldiers without oversight, which only encouraged “hideous assaults” from the Congolese militia.[ref]”US Intervention Backfires in Congo,” A Little Rebellion, August 11, 2009, accessed July 5, 2015, https://roberttaylor32.wordpress.com/2009/08/11/us-intervention-backfires-in-congo[/ref] In a second example, America’s involvement in Egypt also reveal the negative side of U.S. intervention. Egypt’s oppressive regime, led by President Abdel Fattah al-Sisi, have been known to imprison journalists, prosecute LBGT citizens, and even conduct mass executions of protesters. On the second day of February, for instance, 183 citizens were not only issued the death sentence, but were even denied due process, for the deaths of eleven police officers. Security officers are responsible for killing over a thousand protesters, yet no officer was ever punished.[ref]Salma Abdelaziz, Sarah Sirgany, and Josh Levs, “‘Mass Death Sentences’ for 183 in Egypt,” CNN, February 3, 2015, accessed July 6, 2015, http://www.cnn.com/2015/02/02/world/egypt-court[/ref] In March of this year, the White House provided Egypt with military weapons and vehicles – Obama even confirmed his request for an annual $1.3 billion that will assist the Egyptian military.[ref]Greenwald, Glenn. “Obama personally tells the Egyptian Dictator that U.S. will again send weapons (and cash) to his Regime,” The Intercept, March 31, 2015, accessed July 5, 2015, https://firstlook.org/theintercept/2015/03/31/obama-lifts-freeze-weapons-transfer-egyptian-dictator[/ref]

Those supporting America’s military involvement in foreign affairs, like Max Boot who is a fellow in national security studies at the Council on Foreign Relations, argue that it is important for America to police the world. According to Boot, there are evils in the world that would be left unchecked if the U.S. does not intervene.[ref]Eric Weiner, “Should America Be the World’s Policeman?” NPR, February 20, 2008, accessed July 5, 2015, http://www.npr.org/2008/02/20/19180589/should-america-be-the-worlds-policeman.[/ref] Yet John Stossel, political personality for Fox Business, argues that America can make a more positive impact in the world by encouraging free trade, and better relations with other nations instead. A 2012 European funded report found that conflict was lower in the Middle East at that specific time, than it was two decades ago, thanks to free trade.[ref]John Stossel, “Policing the World,” Reason.com, February 2, 2012, accessed July 5, 2015, http://reason.com/archives/2012/02/02/policing-the-world#comment.[/ref] America needs to become a non-interventionist nation. This does not necessarily mean becoming isolationist, but rather, the U.S. would focus more on defense, rather than manipulating government and world order through military power.

If America wants to improve the world, it should consider diplomatic solutions like encouraging free trade. Indeed, free trade has several advantages, such as job creation and economic growth due to higher quantity of exports. Free trade also increases competition, which contributes to overall global economic growth. Since 1945, world trade has increased by seven percent.[ref]”Benefits of Free Trade,” Economics Help, accessed July 7, 2015, http://www.economicshelp.org/trade/benefits_free_trade[/ref] Exporting goods is a much friendlier approach to diplomacy than sending troops. Obama has already made great strides by opening free trade to Cuba,[ref] Charles Rangel, “Free Trade With Cuba Now,” Huffington Post, January 15, 2015, accessed January 6, 2015, http://www.huffingtonpost.com/rep-charles-rangel/free-trade-with-cuba-now_b_6482078.html.[/ref] but that alone is not enough. The U.S. needs to continue to push for diplomacy, while reducing its military footprint across the world, in order to help stabilize the economy, as well as stabilize foreign ties. Encouraging free trade benefits all countries that participate.

Freedom to Trade is an organization that wants to support free trade among all nations. This petition would help to tear down barriers to free trade.

The following petition is meant to be delivered straight to the Senate, House of Representatives, and Obama. The petition is for closing down military bases in foreign countries.