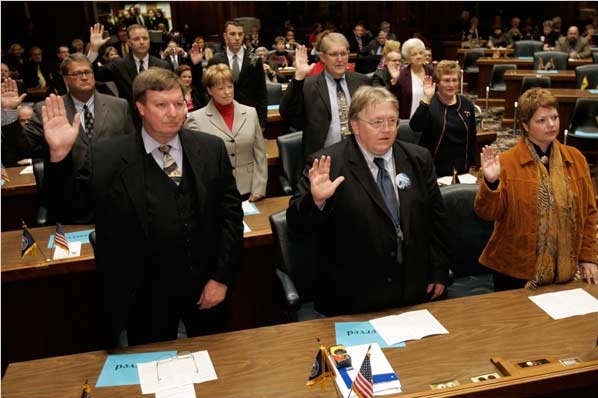 Voting Out: The Electoral College

The United States is currently exercising the process of electoral colleges in presidential elections. This institution – the Electoral College – is made up of 538 electors who cast the votes that decide the president and vice-president of the U.S. The candidate who attains the majority of electoral votes wins the presidency. Political parties nominate electors at state conventions. Then, in forty-eight states, voters pick their candidates, and if one candidate happens to win the votes in a particular state, that very candidate gets all of the electoral votes. Maine and Nebraska are the exception, since their electoral votes are allocated by congressional districts, that way candidates still have a chance to scoop up some votes, even if they don’t win the state.[ref]Jimmy Soni, “What Is The Electoral College? How It Works And Why It Matters,” The Huffington Post, November 6, 2012, Accessed September 13, 2015, http://www.huffingtonpost.com/2012/11/06/what-is-the-electoral-college_n_2078970.html[/ref]The vendetta is trying to efficiently process votes in a presidential campaign, while trying to make sure whoever is elected is representative of who the people really want.

However the reality is that the Electoral College does not always accurately represent who the American people want for president. For example, in 2000, George Bush beat out Al Gore for presidency. However, number shows that it was Al Gore who received 540, 000 more popular votes than President Bush.[ref]Nate Silver, “Would Al Gore Have Won in 2000 Without the Electoral College?” The New York Times, September 20, 2011, accessed September 13, 2015, http://fivethirtyeight.blogs.nytimes.com/2011/09/20/would-al-gore-have-won-in-2000-without-the-electoral-college/?_r=0.[/ref]

The major problem comes down to the Electoral College invalidating votes from citizens, who vote in a state where their party is greatly outnumbered. Take California, for instance, where the state is dominated by roughly forty-three percent Democrat voters. Republicans make up thirty-two percent of the voters, independents make up twenty percent, and five percent make up the rest. [ref]Markn Baldassare, Dean Bonner, David Kordus, and Lunna Lopes, “California Voter and Party Profiles,”PPIC Publication, August 1, 2015, accessed September 13, 2015, http://www.ppic.org/main/publication_show.asp?i=526.[/ref] The current Electoral College system ensures that whoever wins California will win all of its electoral votes, and it is almost always certain that the Democrat candidate will win California. Hence, even though people like to popularize the phrase, “every vote counts,” in an Electoral College system, it does not in actuality. In the case of California, it ensures that Republicans, Independents, and every other party, does not get a say in the presidential election process.

Indeed, according to the 2010 U.S. Census, about 36.3 percent of the American population comprises of racial or ethnic minority groups, such as American Indian, Asian American, African America, Hispanic, etc.[ref]Centers for Disease Control and Prevention, August 11, 2015, accessed September 13, 2015, http://www.cdc.gov/minorityhealth/populations/remp.html.[/ref] Since the population of minorities is less than half, and unevenly distributed across the states, their rights are put in danger. After Donald Trump has made his outlandish remarks about illegal immigrants, for example, his poll numbers have continued to surge.[ref]Jason Easley, “Racist Chickens Come Home To Roost As Donald Trump Leads The GOP In New Poll,” Politicus USA, July 9, 2015, accessed September 13, 2015, http://www.politicususa.com/2015/07/09/republicans-flipping-donald-trump-leads-gop-poll.html.[/ref] A recent poll shows that Trump is receiving up to thirty-two percent of support from GOP voters, which is impressive considering that no other GOP candidate has had more than thirty percent support in the Republican nomination race.[ref]Jennifer Agiesta, “Donald Trump Tops 30%” CNN, September 10, 2015, accessed September 13, 2015, http://www.cnn.com/2015/09/10/politics/donald-trump-ben-carson-cnn-poll[/ref] In his recent remarks, Donald Trump claims that he does not acknowledge citizenship to people who were born in the United States from an immigrant. He went even further in his comments and said that he wants to deport these citizens, even though they are granted citizenship under the fourteenth amendment.[ref]Rick Ungar, “Trump Throws Constitution And 14th Amendment Under The Bus,” Forbes, August 19, 2015, accessed September 13, 2015, http://www.forbes.com/sites/rickungar/2015/08/19/trump-throws-constitution-and-14th-amendment-under-the-bus[/ref] If Donald Trump continues to get traction, and continues to surge in the polls, minorities who are outnumbered in states that want Trump as president, may lose their option to vote for their freedom.

Despite the fact that Electoral Colleges are set up to ensure that a clear winner is made, there are some serious drawbacks. Ideally the candidate that should be made president, should be the candidate that has garnered the most votes from the American voters. However, Electoral Colleges don’t operate under that system. America should turn to a system where the American president is chosen based on popular votes. Should such an event happen where the candidates are deadlocked in votes, then votes can be cast again. Even though this process might take longer, it ensures that democracy is protected.

Let our congress men and women know that the American people no longer want to follow the Electoral College system by signing this petition.

The following petition is also for abolishing the Electoral College. Sign the petition if you want to change the current system!