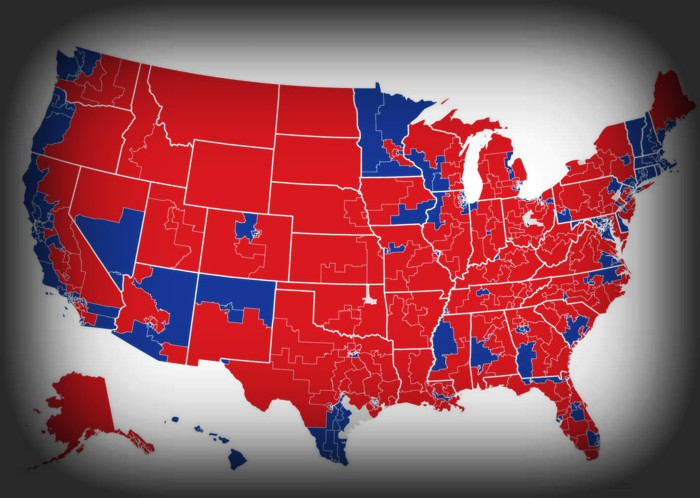 Hashim ArainDecember 5, 2018Comments Off on Drawing the Election0

There’s a practice in electoral politics that could be seen as toxic for the US in the long run, and it most likely won’t end anytime soon. Some of the legislative districts in this year’s midterm elections could’ve been drawn a certain way on the electoral map, to give either political party an advantage over the other in terms of having enough votes to get elected into political office.

This practice is called gerrymandering, which occurs when politicians manipulate the redrawing of the legislative electoral map so that they can help those in their party, and weaken the electoral position of the opposing party.

Gerrymandering is a tool that’s used mostly for political gain. The practice deals with the compactness and equality of size of constituencies. A U.S. Supreme Court ruling in 1964 stated that districts should be drawn to represent the substantial equality of population. Although, the majority parties in state legislatures continue to draw district lines on the electoral map without taking into account local boundaries. In some states, gerrymandering could be used to limit the constituencies of more densely populated urban areas. Some state legislatures in rural areas use this tactic of gerrymandering. The vendetta here is whether gerrymandering is good or bad for democracy. There are both positive and negative effects gerrymandering can have for democracy.

Some believe that in order to fix the problem of partisan gerrymandering, there needs to be some independence in the process of creating district electoral maps. The organization Common Cause advocates for independent redistricting commissions and putting in place nonpartisan staff when dealing with this problem. Common Cause also suggests that there should be clear constitutional rules into how the district lines should be drawn.

There have been several high profile court cases over time which have centered around gerrymandering. In Wisconsin, Gill v. Whitford, dealt with Republicans in the state drawing maps that are favorable to Republicans. A panel of three federal judges ruled that the state Republicans violated the Equal Protections Clause. This case was also the first time in three decades where a federal court invalidated a redistricting plan, because of partisan bias. The Wisconsin District Court has set a four-day trial in April of 2019, to review this case.

The case in Maryland Benisek v. Lamone, where Maryland State Democrats were seeking to have the makeup of the state’s congressional districts stay the same, in order to increase the likelihood that they gain control of the majority in the state legislature. The Supreme Court ruled that it was concerned about a request from the challengers who wanted the courts to rule that the 2018 elections should be held in the same district maps that were created in 2011. The U.S. Court of Maryland has since ruled that the district at the center of this case: which is the Sixth Congressional District of Maryland, should have its map thrown out. This is seen as a major win for Western Maryland State Republicans, who were supporters of the plaintiffs in this decision.

Another gerrymandering case in North Carolina, Rucho v. Common Cause, concerned the state’s Republican-led state legislature implementing a map which gave North Carolina Republicans a chance to hold 10 of the 13 congressional seats. The Supreme Court sent this case down to a lower court where a three-judge panel struck down and invalidated the use of these congressional maps, on the grounds that it was rigged in favor of one political party over another.

The best solution to solve the gerrymandering epidemic would be to have independent commissions draw the legislative and electoral district maps. By doing this, it shows a certain aspect of objectivity when implementing the legislative district maps. If legislators continue to draw the district maps then they will most likely have an agenda when drawing the map. The majority party who draws these maps clearly desires a legislative advantage over the opposing party in their respective state legislatures, as these recent gerrymandering court cases have shown.

By having a neutral party draw the legislative maps, it will show the powerful officials in both political parties that the process is being done in a fair and balanced way. Gerrymandering can be an ugly process, and it will be better for the country if this process was done in a fair way. Gerrymandering can help swing an election in one party’s favor in a big way, and it’s important that both Democrats and Republicans have a chance at getting an equal number of seats in an election. Implementing independent electoral maps is key to achieving that goal.

Common Cause: This organization deals with democracy that works for all Americans, and believes elections should represent the people, not the politicians. They’re  against politicians redrawing the legislative and congressional district boundaries. They also advocate for creating independent redistricting commissions, as well as hiring non-partisan staff to assist with how the district lines should be drawn, in order to combat gerrymandering. Learn more about their efforts here.