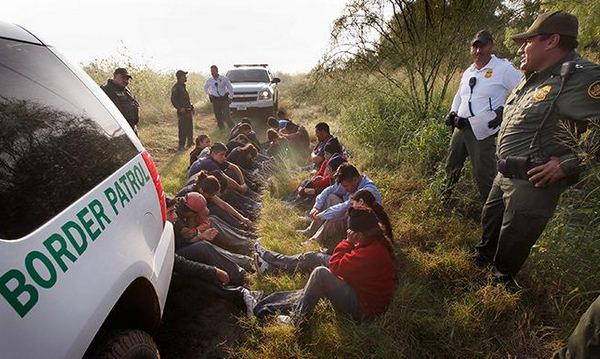 As of 2012, 5.9 million unauthorized immigrants from Mexico were reported living in the U.S. – deeming this specific demographic as the largest group of immigrants in the country.[ref] Gonzalez-Barrera, Ana, and Jens Krogstad, “What We Know about Illegal Immigration from Mexico,” Pew Research Center, July 15, 2015, accessed July 26, 2015, http://www.pewresearch.org/fact-tank/2015/07/15/what-we-know-about-illegal-immigration-from-mexico[/ref] The rise of immigration, particularly undocumented individuals, serves only to increase American concerns over national security. Donald Trump, for instance, recently voiced his opinion on the issue of illegal immigration, claiming that Mexicans who come to the U.S. illegally are “killers” and “rapists.” Trump justified his statement by referencing the story of Kate Steinle, a woman from San Francisco, who was shot by Juan Francisco Lopez-Sanchez, a Mexican immigrant. Yet ever since Turmp’s remarks, support for him increased, as conveyed in a recent CNN poll, leaving him in second place among the Republican Party.

The idea that illegal immigrants, as believed by Trump and his followers, are killers and rapists is simply not a true statement.[ref]ChrisMoody, “Donald Trump Digs in on Immigration,” CNN, July 9, 2015, accessed July 27, 2015, http://www.cnn.com/2015/07/07/politics/trump-immigration-rapists-mexicans-clinton[/ref] While there is danger to unprotected borders, the danger comes from the few cartel criminals that make up a small minority of illegal immigrants. Last year, drug cartels, in their efforts to reclaim parts of the border to secure routes for drug smuggling, have upgraded their battle tactics to include grenades. Residents from Nuevo Laredo, Mexico, reported hearing a grenade “go off every night.[ref]TomPorter, “Mexican Drug Cartels Wage War with Grenades in US Border Wars,” IBTimes, August 15, 2014, accessed July 26, 2015, http://www.ibtimes.co.uk/mexican-drug-cartels-wage-war-grenades-us-border-wars-1461316.[/ref] With violence increasing across the border, investing in border control can help with efforts against the cartel. There is no denying that there is a national security risk when it comes to relaxed border control.The vendetta is trying to maintain a balance between border security and accessibility of citizenship status.

Those against immigration reform have argued that newly legalized residents would drain up the nation’s resources. Other opponents argue that the new wave of immigrants take away the job availability for other American workers. But many of these concerns are unfounded – indeed everyone stands to benefit from immigration. A 2012 economic analysis discovered that from 1990 to 2006, immigration to the U.S. caused a wage increase from for native-born Americans, from .6 percent to 1.7 percent, effectively stimulating the job market. The large number of immigrants expanded the number of consumers purchasing goods, allowing businesses to pay employees a bigger wage, as well as hire and support more workers. [ref]Carrie Dan, “The Arguments for and against Immigration Reform,” NBC News, April 12, 2013, accessed July 26, 2015[/ref] In another instance, Latino immigrants in Hazleton, Philadelphia, helped transform the city budget deficit into a surplus from 2000 to 2005. Moreover, the influx of Latino immigrants sparked a decrease crime rates, while helping private hospital systems make a four million dollar profit.[ref]”Hazleton, PA Anti-Immigrant Law Is Unconstitutional, Federal Appeals Court Rules,” American Civil Liberties Union, September 9, 2010, accessed July 26, 2015, https://www.aclu.org/news/hazleton-pa-anti-immigrant-law-unconstitutional-federal-appeals-court-rules[/ref]

Overall, legal immigration should become more accessible by normalizing immigration, and making the process more efficient, as well as reliable. Although President Barack Obama has promised to make serious changes in immigration reform, he has not focused enough on this issue. [ref]”White House: Obama Hasn’t Decided on Immigration Specifics,” Potus Operandi, November 12, 2014, accessed July 28, 2015, http://blogs.rollcall.com/white-house/white-house-obama-hasnt-decided-on-immigration-specifics/?dcz[/ref] Currently, Obama has granted amnesty to some illegal immigrants, but this hardly alleviates the issue.[ref]”Did President Obama Grant Amnesty to Illegal Immigrants Without Congress?” Ask Heritage, accessed July 28, 2015. https://www.askheritage.org/did-president-obama-grant-amnesty-to-illegal-immigrants-without-congress[/ref] Policy initiatives still need to be made, to make way for new laws to create easement for immigrants to enter the country legally. Providing even more of an incentive, the U.S. also stands to benefit from granting illegal immigrants citizenship. Economist Sherrie Kossoudji from the University of Michigan, and Deborah Cobb Clark from Australian National University, determined that men gained about fourteen to twenty four percent higher wages when having received legal status. Again, legalized workers have more money in their pocket, which yields more tax revenue and more consumer buying power, essentially strengthening the economy. Furthermore Raul Hinojosa-Ojeda, founding director of the North American Integration and Development Center of California, Los Angeles, estimates that within the first three years after becoming legal, workers can collectively earn thirty to thirty-six billion dollars, which would mean $4.5 to $5.4 billion dollars in additional net tax revenue.[ref]”An Immigration Stimulus: The Economic Benefits of a Legalization Program,” accessed July 26, 2015, http://www.immigrationpolicy.org/just-facts/immigration-stimulus-economic-benefits-legalization-program.[/ref]

Border control, meanwhile, should continue to be advanced and tightened to prevent threats, like the cartels entering the country. Some proposed solutions, while in nature may seem drastic, can alleviate many border issues. One strategy, for instance, to preventing national security risks from breaching the border is to expand legalization of drugs. This, in turn, will eliminate the selling power of drugs, and ultimately destroy any incentive for cartels to enter the U.S. Legalizing alcohol worked in ridding bootlegging mafias, like the Al Capones, and the same principle is applicable to drugs. Another solution requires bringing the troops home, and having them guard the border. Indeed, rather than placing U.S. forces in allied nations, like Japan and Thailand, they could be of more use protecting the America’s national security.

The numbers speak for themselves: more immigrants leads to the betterment and growth of America. The U.S. needs to push for immigration reform. Contrary to many opposing beliefs, many immigrants do not want legal status for welfare. What many of immigrants want is the access to property and rights. Immigration reform should provide for an accessible “pathway to citizenship.”[ref]Ed. Krayewski, “A Libertarian Solution to Immigration Reform,” Reason, March 4, 2014, accessed July 26, 2015, http://reason.com/archives/2014/03/04/libertarian-answer-to-immigration-reform.[/ref] Doing this ensures that the millions of illegal immigrants already living in America can participate economically and actively in society.

“The Dream is Now” is an organization dedicated to reforming the broken immigration system. Visit their website to see how you can contribute to the cause.