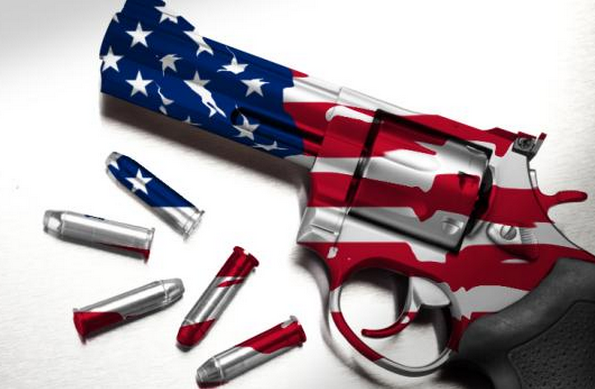 In the beginning of July, ex-CNN anchor Lynne Russel told gun control activists to “shut the f*** up” after her husband sent a fatal shot at an armed felon in their Albuquerque motel, saving the both of them. [ref]ChuckRoss, “Ex-CNN Anchor Tells Gun Control Activists To ‘Shut The F*** Up,’” Daily Caller, July 6, 2015, accessed August 3, 2015, http://dailycaller.com/2015/07/06/ex-cnn-anchor-tells-gun-control-activists-to-shut-the-f-up[/ref]The anecdote represents a complex dilemma in American politics focusing on guns. Many politicians, especially on the left, feel that gun rights pose too many dangers, and therefore call for stricter gun control laws. Gun control advocate Piers Morgan, a former CNN anchor, once spoke about the Sandy Hook tragedy – where twenty-year-old Adam Lanza fatally shot twenty children and six adults at an elementary school – saying, “How could you let twenty first graders be shot dead in their classrooms and the reaction would be absolutely nothing?”[ref]Eun Kim, “Piers Morgan: ‘I Don’t Regret Standing Up’ for Gun Control,” Today, October 6, 2014, Accessed August 2, 2015, http://www.today.com/news/piers-morgan-i-dont-regret-standing-gun-control-2D80195975.[/ref]Vice President Joe Biden has been vocal about gun control, and has fought for the ban of AR-15’s, a kind of gun, arguing these devices are hard to aim, hard to use, and that its capacity for thirty rounds is excessive.[ref]Billy Hallowell, “5 of the Most Absurd Gun Comments from Joe Biden,” The Blaze, April 12, 2013, Accessed August 3, 2015,  http://www.theblaze.com/stories/2013/04/12/joe-bidens-5-most-absurd-quotes-about-firearms-and-gun-owners[/ref]

Many on the right, however, like Senator John Thune, [ref] “CONGRESS’ 20 BIGGEST GUN RIGHTS ADVOCATES,” The Daily Beast, Accessed August 3, 2015, http://www.thedailybeast.com/galleries/2011/01/13/congress-20-biggest-gun-rights-advocates.html#slide2.[/ref] believe that owning a gun is a right of every American, and is guaranteed within the second amendment. A gun shop owner in Corsicana, Texas countered Biden’s statement, arguing that when someone learns how to handle an AR-15 properly, the guns are actually a better choice for home defense, especially because of their high accuracy.[ref]Billy Hallowell, “5 of the Most Absurd Gun Comments from Joe Biden,” The Blaze, April 12, 2013, Accessed August 3, 2015,  http://www.theblaze.com/stories/2013/04/12/joe-bidens-5-most-absurd-quotes-about-firearms-and-gun-owners[/ref] Indeed, there is no denying that America has endured too many unnecessary gun deaths, but the fault may not lie with the guns themselves. The vendetta is trying to find the right balance between gun rights while trying to prevent violent crimes conducted with guns.

Cities, such as Chicago, have the most restrictive gun laws in the nation, yet also experience higher murder rates than most cities in the country. Within the first few three months of 2015, shootings increased about forty percent, and homicides went up twenty-nine percent. Eighty murders were recorded in the first quarter, compared to the sixty two murders recorded in the first period of 2014.[ref] Aamer Madhani, “Murders, Shootings on the Rise in Chicago,” USA Today, April 2, 2015, Accessed August 3, 2015, http://www.usatoday.com/story/news/2015/04/01/chicago-murders-shootings/70787110[/ref] In another instance, England and Wales, having banned guns in 1997, observed no difference in homicide rates. In fact, the 2010 homicide statistics was only a bit lower than in 1996.[ref]John Lott, “Murder and Homicide Rates before and after Gun Bans,” Crime Prevention Research Center, December 1, 2013, Accessed August 3, 2015, http://crimepreventionresearchcenter.org/2013/12/murder-and-homicide-rates-before-and-after-gun-bans[/ref]  But in Kennesaw, Georgia, each household is required to maintain a firearm since 1982. Even though the law is not enforceable, the town’s already low crime rate dropped by eighty-nine percent.[ref] Larry Copel, “Georgia Town Not Alone in Using Gun Law as ‘deterrent,'” USA Today, April 2, 2013, Accessed August 3, 2015, http://www.usatoday.com/story/news/nation/2013/04/02/georgia-town-not-alone-in-using-gun-law-as-deterrent/2048059[/ref] While the relation between violent crime rates and gun policy may simply be correlational, they are still worth considering.

Moreover, strict gun control measures do very little to restrict the accessibility of firearms to criminals, since there are several different means of getting a gun illegally. For instance, a popular method is to order the guns online, that way criminals can bypass background checks. This was the case in 2007 Virginia Tech Shooting, where senior Seung-Hui Cho, bought a gun online. In another example, the shooters from 1999 Columbine High School Massacre received their guns from a friend, who bought it from an unlicensed seller.[ref]”Where’d They Get Their Guns?” VPC, Accessed August 3, 2015, http://www.vpc.org/studies/wgun990420.htm.[/ref]

The central theme for the second amendment is the right for citizens to be well armed and ready to defend themselves, should the government turn on its own citizens. While it may seem far-fetched to believe that the American government can turn on its own people, the truth is it is not an impossible reality. Just a few generations ago, Japanese American citizens were sent to internment camps against their will. In the modern day, with the passing of the National Defense Authorization Act (NDAA), the government can now detain and kill American citizens, suspected as a terrorist, without due process. This has already occurred with the case of Anwar al-Awlaki, a suspected, who was killed outside the U.S with a drone, and without due process.

Gun control laws should be scaled back, and designed so that firearms are easier to obtain by citizens. Doing so can level the “playing field” between criminals and citizens. Americans should have the right to choose how to defend themselves and their family. And for many citizens, guns provide them the best option for that protection. The current gun laws usually center on checking the potential gun owner’s background to check for mental health or violent record. While a study in Connecticut reveals that background checks reduced violent crime by about fifty percent, it is uncertain whether these numbers can stay stable in the long run.[ref] LoisBeckett, “What We Actually Know About the Connections Between Mental Illness, Mass Shootings, and Gun Violence,” Pacific Standard, June 10, 2014, Accessed August 3, 2015, http://www.psmag.com/health-and-behavior/actually-know-connections-mental-illness-mass-shootings-gun-violence-83103.[/ref] But these facts aside, background checks can even prove to be detrimental. Carol Bowne, a New Jersey resident, in addition to filing a restraining order, also tried to buy a gun in order to defend herself against a violent former boyfriend. While waiting for the paperwork to process, her ex stabbed Carol to death.[ref]Perry Chiaramonte, “‘No One Helped Her’: NJ Woman Murdered by Ex While Awaiting Gun Permit,” Fox News, June 10, 2015, Accessed August 3, 2015, http://www.foxnews.com/us/2015/06/10/no-one-helped-her-nj-woman-murdered-by-ex-while-waiting-for-gun-permit[/ref] Hence, creating restricting gun laws may hurt the very citizens it is trying to protect.

Furthermore, those proven with mental health issues are not violent criminals. Individuals with severe cases could be rehabilitated.  While tackling mental health issue in this country is a whole other topic, the basic idea is this: the purpose of scaling back the gun laws is not so the criminals can get guns easily, but rather, it is so that the everyday citizen can have the ability to fight back against dangerous criminals.

The National Association for Gun Rights is an organization dedicated to protecting gun rights. If you want to find out some ways to protect your rights to own a gun check them out.