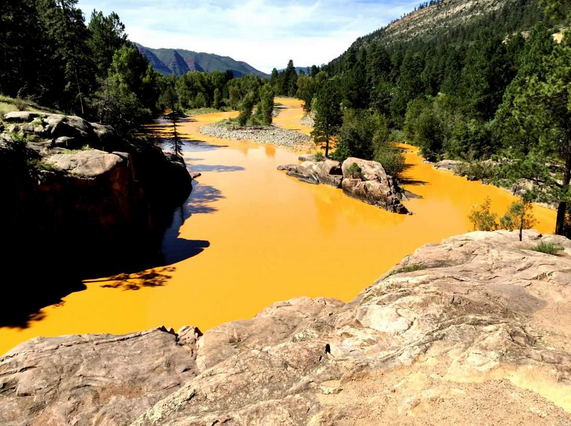 In early August, the Environmental Protection Agency (EPA) admitted responsibility for  polluting the Colorado river with one million gallons of toxic orange wastewater, while trying to clean an abandoned gold mine.[ref]Mary Mallonee, “EPA Aware of ‘Blowout’ Risk for Toxic Water at Gold King Mine,” CNN, August 22, 2015, accessed August 23, 2015, http://www.cnn.com/2015/08/22/us/animas-river-colorado-epa-mine-spill[/ref] The incident raises questions about the effectivity of environmental protection, a vital element in maintaining earth sustainability. Even though democrats, like President Barack Obama, have advocated for the EPA, and their fight to protect the environment, [ref]”President Obama’s Plan to Fight Climate Change,” The White House, accessed August 23, 2015, https://www.whitehouse.gov/climate-change[/ref] Senate Republicans are fighting back to limit the agency’s power as much as possible. Mitch McConnell, Senate Majority Leader, recently attended a hearing, or “face off” against the EPA chief which many believe to be an attempt to undermine Obama’s “climate agenda.”[ref]Zack Colman, “Mitch McConnell Squares off against EPA Chief,” Washington Examiner, April 29, 2015, accessed August 23, 2015, http://www.washingtonexaminer.com/mitch-mcconnell-squares-off-against-epa-chief/article/2563746[/ref] The vendetta is trying to protect the environment effectively, while maintaining civil liberties, as well as keeping it cost effective.[ref]Sara Sciammacco, “New Audit Finds EPA’s Approach to Reduce Nutrient Pollution Is Ineffective,” EWG, September 4, 2014, accessed August 23, 2015, http://www.ewg.org/release/new-audit-finds-epa-s-approach-reduce-nutrient-pollution-ineffective[/ref]

The EPA’s lack of understanding surrounding the science of nitrogen and phosphorous pollution is not entirely their fault.  In fact, most of the blame should go to Washington DC. Last year, the House of Representatives passed a legislation (H.R. 1422) that prohibits academic scientists on the EPA’s Scientific Advisory committee from participating in “activities that directly involve review of evaluation of their own work.” Simply said, this legislation would prevent scientists from advising the EPA on their own research. This policy has resulted in inefficient regulations. Indeed, a regulation passed last year was designed to cut the amount of sulfur in gasoline. It was believed that emissions would be reduced by eight to ten percent within a year. In actuality, the reduction of ozone levels were be miniscule, and resulted in 1.2 parts per billion during rush hour – that is a savings of twelve cents out of one hundred million dollars. These improvements were so small that it could not even be measured by current modern-day equipment. Moreover,while the EPA claimed that these new regulations would reduce asthma in children, asthma actually increased.[ref] Paul Driessen, “More Bad Science from EPA,” Jefferson Policy Journal RSS, April 10, 2014, accessed August 23, 2015, http://www.jeffersonpolicyjournal.com/more-bad-science-from-epa[/ref] While it is not completely clear why the government would pass such legislation, there is speculation that politicians want to use scientific uncertainty to avoid acting on environmental problems.

Bad science is not the only issue with the EPA. A recent federal audit revealed that the agency has, on numerous occasions, not only refused to fire incompetent or corrupt employees, but also keep these workers at full pay. In several instances employees were even caught viewing pornography during paid work hours. One employee reported to having viewed six hours of porn a day, while on the clock. Despite these antics, the agency continues to pay these employees earning an annual salary $120,000. Some employees have been known to allocate large sums of EPA funding to special interest groups – $93,000 was even given to Tijuana.[ref]”EPA Fails to Punish Corrupt Workers, Lets Them Keep Full Pay,” Judicial Watch, June 12, 2015, accessed August 23, 2015, http://www.judicialwatch.org/blog/2015/06/epa-fails-to-punish-corrupt-workers-lets-them-keep-full-pay[/ref] On top of that, Obama’s energy czar Carol Browner, has been repeatedly misrepresented scientists’ findings, and manipulating data, in order to justify various regulations. Browner has also been caught using taxpayer funds to send out illegal lobbying material to more than one hundred left-wing environmental organizations.[ref]Michelle Malkin, “Here’s Why The EPA Could Be The Most Corrupt Agency Of The Government (And That’s Saying Something),” Western Journalism, August 1, 2014, accessed August 23, 2015.[/ref]

One alternative for environmental protection is to promote private ownership of land. While it would be presumptuous to blame the EPA for the bad science or accidental spills, the truth is that since the EPA has to answer to Washington, their scope may be extremely limited. With several politicians who reject sound science and instead cling to a belief that climate change is a myth, it can disrupt any progress the EPA is making. The founder of CNN, Ted Turner, is the largest landowner in North America, his holdings in Patagonia amount to a little over 128, 000 acres. Along with Turner other wealthy businessmen like John Eliash, who bought 400,000 acres of the Amazonian rainforest, are using their money to privately own land, in order to preserve their natural essence.[ref]John Vidal,  “The Great Green Land Grab,” The Guardian, February 13, 2008, accessed August 23, 2015, http://www.theguardian.com/environment/2008/feb/13/conservation.[/ref] This does not mean that the EPA has to be dissolved entirely, but scaled to make it easier for private owners to buy and preserve land. Other benefits to a scaled back EPA would mean they would be allocated less funding from the government, saving taxpayer dollars, also making the government less involved with environmental issues could eliminate issues with bad science.

The following petition, from the “Heartland Institute” that claims to empower people, was created in hopes to “rein” in the EPA.

“Americans for Prosperity,” an organization striving for economic freedom, also hosts a petition attempting to stop the EPA’s bad policies.