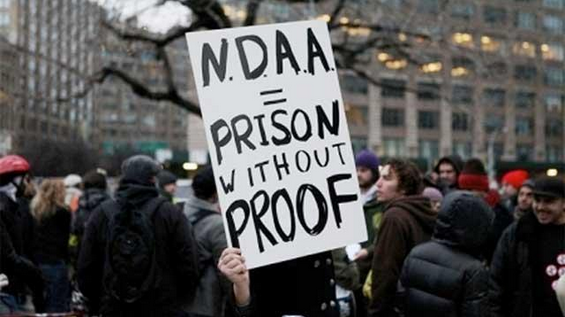 In 2011, President Barack Obama signed the National Defense Authorization Act (NDAA) into law.[ref]”National Defense Authorization Act,” Snopes.com, accessed July 10, 2015. http://www.snopes.com/politics/military/ndaa.asp[/ref] This Act is constantly renewed each year – including next year, which received a staggering seventy-one to twenty-five votes in the Senate.[ref]Sydney Freedberg, “Senate Passes NDAA By Veto-Proof 71-25; McCain Pledges July Conference,” Breaking Defense,  June 18, 2015, accessed July 10, 2015, http://breakingdefense.com/2015/06/senate-passes-ndaa-by-veto-proof-71-5-mccain-pledges-conference-in-july[/ref] Although the bill allows the U.S. government to fund national security interests and the military for the fiscal year, the controversy focuses on section 1021 and 1022 of the act, which gives the president authority to detain anyone indefinitely, including U.S. citizens without due process, that is suspected of aiding terrorists in any way.[ref]”Sections 1021, 1022 of NDAA,” Montgomery County Civil Rights Coalition, April 6, 2012, accessed July 10, 2015, https://mococivilrights.wordpress.com/ndaa/mccrc-ndaaaumf-resolution/sections-1021-1022-of-ndaa[/ref] Now, every American is vulnerable to the dangers of this law. The NDAA violates the constitution by suspending due process and puts every citizen in danger of being indefinitely detained. The Vendetta the U.S. can fight terrorism, without abusing its power against its own American citizens.

In another case, during 2012, as the Occupy Wall Street movement was gaining momentum, government branches, like the FBI, were busy trying to stop the protesters. Shocking documents revealed that the FBI had collaborated with banks and campus police to receive information about the protesters in a collective effort to stop the movement. The Partnership for Criminal Justice Fund obtained documents that further revealed that the FBI had designated the protesters as “terrorists,” even though the Occupy group had been acknowledged as a peaceful organization. This practice has been used in branches all over the country.[ref]Naomi Wolf, “Revealed: How the FBI Coordinated the Crackdown on Occupy,” The Guardian, December 29, 2012, accessed July 13, 2015, http://www.theguardian.com/commentisfree/2012/dec/29/fbi-coordinated-crackdown-occupy.[/ref] In 2011, an Orlando Islamic scholar, going by “Abu Taubah,” had been incarcerated for tax fraud and illegal gun possessions. Moreover, prosecutors tried to add “terrorism enhancement” to his sentence, which would have given him up to twenty years in prison. Lawyers attempted to justify such ties to terrorism by referring to about twenty titles, out of more than ten thousand, from his collection of e-books, which contained controversial passages. The judge ended up dismissing these charges, acknowledging that it is not unnatural for an Islamic scholar to study the writings of other extremists.[ref]Murtaza Hussain, “Florida Man, Accused of Terrorism Based on Book Collection, Set Free,” The Intercept,  June 29, 2015, accessed July 13, 2015, https://firstlook.org/theintercept/2015/06/29/case-orlando-imam-judge-rules-islamic-books-evidence-terrorism[/ref]

Section 1021 and 1022 of the NDAA have even been used against non-U.S. citizens. Musa’ab al-Madhwani, while trying to make his way back to Yemen, was arrested as he was staying in an apartment occupied by groups that were targeted by Pakistani forces. After being tortured, al-Madhwani was transferred to U.S. officials who then coerced him into confessing associations with terrorism. Since his capture, al-Madhwani has spent more than ten years in Guantanamo Bay. When al-Madhwani was brought to court, a Supreme Court judge cited section 1021 of the NDAA to justify the detention.[ref]”Indefinite Detention and Torture: US Already Enforcing NDAA,” RT, January 30, 2012, accessed July 13, 2015, http://rt.com/usa/us-ndaa-al-madhwani-gitmo-089[/ref] Indeed, while al-Madhwani is not an American citizen, the very same section of the NDAA was used against a foreigner.

In 2014, Federal Judge Katherine Forrest tried blocking section 1021 of the NDAA. Less than twenty-four hours after Forrest’s decision, the Obama administration appealed it, stating that it was vital to national security. [ref]Lucy Steigerwald, “Obama Administration Argues That Blocking the NDAA’s Indefinite Detainment Provision Will Harm the U.S.,” Reason.com, September 14, 2012, accessed July 10, 2015, http://reason.com/blog/2012/09/14/obama-administration-argues-that-blockin[/ref] John McCain defended the president and the NDAA, arguing that the scenario that the president could turn on the citizens is a ridiculous one.[ref] Lance Johnson, “John McCain Defends NDAA, Calls Rand Paul ‘wacko Bird’ for Defending Constitution,” Natural News, March 13, 2013, accessed July 10, 2015, http://www.naturalnews.com/039462_John_McCain_NDAA_Rand_Paul.html.[/ref] In fact, when Obama stated that section 1021 would not apply to American citizens, John McCain became upset by the remarks, and even refused to participate in voting nominees unless certain provisions, including section 1021, were kept.[ref]Robert Johnson, “John McCain Is Furious That He Can’t Lock Up Americans Under The NDAA,” Business Insider, March 30, 2012, accessed July 10, 2015, http://www.businessinsider.com/john-mccain-wants-to-enforce-the-ndaa-2012-3[/ref]

The bottom line is that the NDAA gives the US government too much power over the American people. The Obama administration has already demonstrated that citizens could be killed without due process, and actions from the FBI prove that the government is not above using “terrorism” as a way to turn on its citizens. NDAA needs to be repealed, and the government should not be allowed to operate outside of the Constitution. Any American, even those that are a suspect in terrorist activities, deserves due process. Terrorist suspects have been successively tried in court before and have been convicted. In fact about five hundred terrorists have been convicted in civilian court.[ref]”Myth v. Fact: Trying Terror Suspects in Federal Courts,” Human Rights First, March 1, 2015, accessed July 10, 2015, http://www.humanrightsfirst.org/sites/default/files/Federal-Court-Myth-vs-Fact.pdf.[/ref] For example, a Palestinian terrorist group was arrested just this past year for being involved in terrorist acts in Israel, which involved the death of American citizens.[ref]Benjamin Weiser, “Palestinian Groups Are Found Liable at Manhattan Terror Trial,” The New York Times, February 23, 2015, accessed July 13, 2015, http://www.nytimes.com/2015/02/24/nyregion/damages-awarded-in-terror-case-against-palestinian-groups.html. [/ref] Indeed, going through due process may be more time consuming, but it ensures that no one is wrongly convicted. Due process is not meant to protect the terrorist, it is meant to protect individual rights. When the government suspends those rights, it is the citizens, not the terrorists, who suffer the most.

This petition addresses the NDAA and calls for a veto for the bill. The petition already has over 10,000 letters, but still needs as much support as it can get.

Stop NDAA is an organization dedicated to ending the unconstitutional act. Check out “Stop NDAA” to see how you can support the cause.