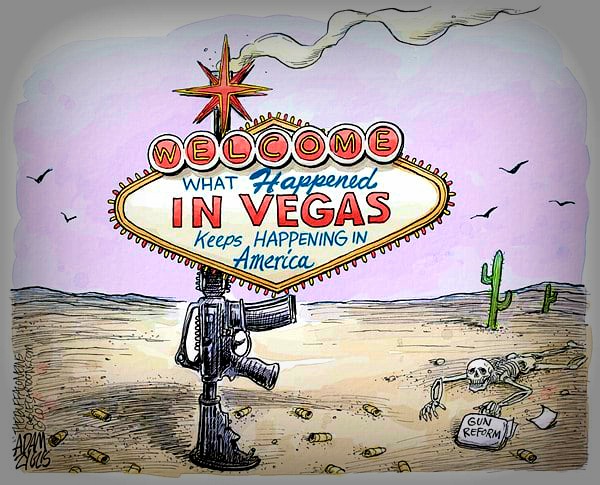 What Happened in Vegas … Should Never Happen Again!

Cassandra MoralesOctober 11, 2017Comments Off on What Happened in Vegas … Should Never Happen Again!0 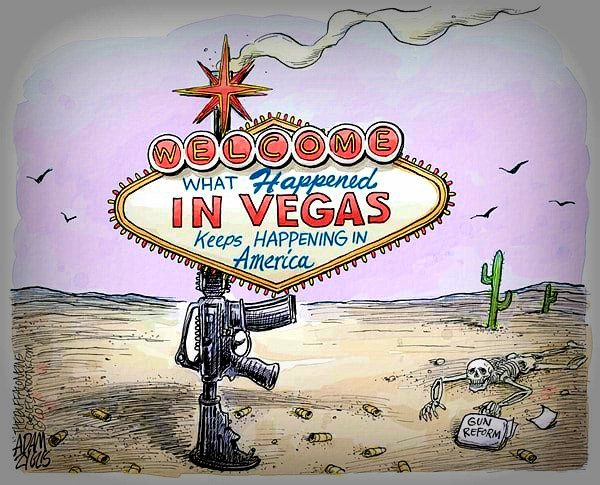 The nation is shaken to its core after the deadliest mass shooting yet — 58 innocent lives are gone while 500 more are currently injured. On October 1st, shooter Stephen Paddock opened fire on a crowd attending a country music festival, sending hundreds of bullets into the audience below. Paddock utilized bump stocks, which are “devices that allow a semiautomatic rifle to fire hundreds of rounds per minute”, to terrorize innocent lives. (1) Gun violence is not a taboo in the United States, a nation that “makes up less than 5% of the world’s population but holds 31% of global mass shooters”. (2)

The Vegas shooting brings the gun control topic back into debate, with a divide between liberals and conservatives. Liberals immediately clamored for gun control, while conservatives fired back with protests for the protection of the second amendment. “While there is no federal law on concealed-carry permits, all 50 states have passed laws allowing citizens to carry certain concealed firearms in public” either with or without permits. (3) The constant back and forth on this debate has done little to the prevent gun-related terrorism in this country. Whether it’s children from Sandy Hook Elementary, or everyday concert-goers in Las Vegas, the loss of life that stems from these shootings also comes from the ineffective regulation of guns. Without a proper solution, more lives are in danger

The vendetta here is between public safety and individual rights to own guns. The public safety argument alludes to reducing gun-related violence through the complete ban or regulation of guns while the individual rights argument fights against any gun restrictions to protect a constitutional right. Here are some of the main arguments on each side:

There is a common assumption that ONLY mentally ill, “sick” individuals commit mass shootings and responsible owners with guns can prevent them. However, the previous study mentioned found that “there was no significant correlation… between mental illness and crime rate”. (5) This belief assumes that violent tendencies can only stem from mental illness, despite the fact that the majority of mentally-ill people are not violent. Another problem with this narrative is that it does not hold those “responsible non-mentally ill gun owners” accountable for their harmful actions.

Trump recently repealed an Obama-era rule that prevented citizens with psychiatric disabilities from owning guns, as Republicans declared themselves as champions of the de-stigmatization of mental illness. Ironic, since Republicans “simultaneously support health care bills that leave mentally ill people without care.” (6) Rather, as some on the left suspect, Republicans only wanted to appease the NRA by allowing more of the population to buy guns — consolidating even more support from the association.

It is difficult to implement a universal ban on all guns, which partly due to the strong gun culture in the U.S. Finding a balance between the complete abolition of guns and the legality of them calls for a more bipartisan approach — regulation. While pro gun control activists, like Senator Feinstein, argue that no law could have prevented the tragedy seen in Vegas, they agree that tighter gun regulations could be a step forward regardless. (7) Some sensible gun control policies that have received support on both sides of the aisle have been:

A nationwide policy with a set of regulations, such as universal thorough background checks, limiting dangerous firearms, and barring certain individuals from obtaining weapons might be able to combat some issues related to gun-related violence. While these solutions may not completely eradicate gun-related violence or mass shootings, they can help counter the effects that the presence of guns have in U.S society.

Visit https://www.bradycampaign.org/about-brady, an organization that donates to the Las Vegas shooting victims and is dedicated to preventing gun violence

Watch this short YouTube video to learn more about the history behind gun legislation: https://youtu.be/wAXxQBIfH7I