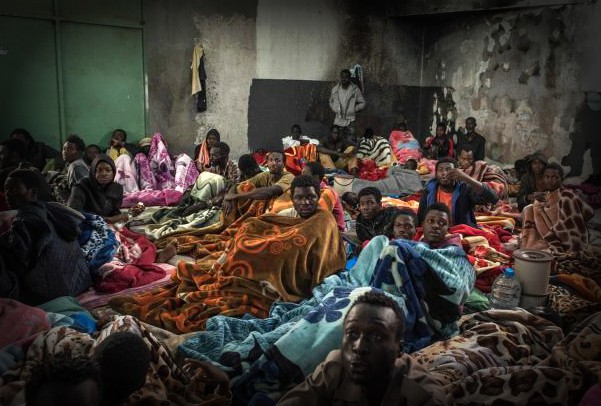 The Libyan Slave Trade – Now is the Time for Intervention 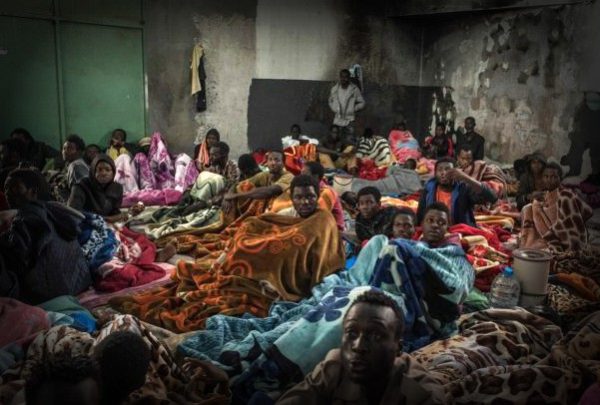 $400 — the price of a human being sold as a day laborer in Libya. Video footage of this incident has sparked international debate over the treatment of refugees and migrants in Libya. It is estimated that over 300,000 refugees have drowned en route to Europe from Libya, the main transit to Europe by sea. [1] In a recent tweet, President Trump attacked the credibility of CNN International, stating that the organization “is still a major source of (Fake) news;” Libyan media cited this tweet following a CNN investigation into the slave trade, denying the crisis entirely. [3] However, the international community has acknowledged the issue and is urging for there to be a response from the European Union (EU). Due to the removal of Libyan prime minister Muammar Gaddafi in 2011, instability in the country has lead to the festering of illicit activities, like the rise of the Libyan slave trade. No strong rule of law has left the population vulnerable and prone to abuse by insurgent groups who have taken power. There is a sense of urgency to address the violations of human rights in Libya, as slavery is believed to have been abolished practically worldwide.

The vendetta in this situation is between stability vs. humanitarianism, as states are wary of destabilizing Libya even further in spite of the obvious human rights abuses occurring. Migrants and refugees become entangled in a web of debt and expect the worst forms of treatment as they escape their countries in search of prosperity, safety, and opportunity. The reason for multi-state intervention in Libya was to halt the human rights violations under the Gaddafi regime. “But after the former Libyan leader was killed, Libya plunged into chaos with militias taking over and two rival parliaments and governments forming,” according to the BBC. [2]  These governments failed to implement a rule of law, making Libya seem lawless. This lawlessness has “ splintered into several factions of militias, tribes, and gangs” that perpetuate and run illicit activities such as the slave trade. [1] Dubbed as Obama’s “worst mistake”, the NATO operation that helped remove the prime minister has undoubtedly fueled the slave trade through this instability. [2] President Obama has said that “there has to be a much more aggressive effort to rebuild societies that didn’t have any civic traditions”, which the U.S and NATO allies did not do. [3]

Because of this, it makes sense that countries are afraid to intervene in Libya and once again make a fatal mistake that can destabilize the region again, leading to more loss of life. However, the U.S and other countries that are a part of the United Nations should take action to address the abuses migrants in Libya are suffering. A consequence of lack of nation building in Libya was the creation of the slave trade. It should be the responsibility of the UN to fight for improvement of human conditions and refugee rights in Libya as a result.

The United States, as part of the UN, has called for Europe to respond to this humanitarian crisis by loosening the restrictions they have on allowing African refugees and migrants cross their borders. [4] A way to indirectly alleviate the human trafficking issue in Libya is by pushing for Europe to provide a safe and accessible pathway for African refugees and migrants. Its failure to do so has perpetuated the Libyan slave trade due to the inevitability of migrants and refugees seeking asylum. So far, Europe’s current failed attempts to respond to the flow of these migrants have been:

Additionally, the UN is also considering imposing sanctions on those involved with the slave trade in Libya in effort to thwart their illegal operations. [6] It is possible that sanctions will have the force necessary to halt the trade, limiting loss of lives. However, there is still uncertainty on how these sanctions can be successfully enforced. Whatever the strategy may be, many agree that “to see the pictures of these men being treated like cattle… should shock the conscience of us all” and ignite some form of action, according to Nikki Haley, US ambassador to the UN.

The most reasonable solution to alleviate the Libyan slave trade would be for the United States, along with other UN members, to pressure European countries to provide a safe and accessible route for African migrants and refugees. Poverty, violence, and unrest in countries will not end overnight — there will always be a need for migrants to seek refuge elsewhere.

For a quick informational video about the Libyan slave trade, please refer to: http://time.com/5042560/libya-slave-trade/. You can also write to the UN (https://usun.state.gov/contact)  and contact US representative to the United Nations, Nikki Haley, to express your concern for the situation in Libya (https://usun.state.gov/contact). Let them know you believe that addressing migrant trafficking in Libya should be a top priority. Lastly, you can show your support for those suffering in Libya by donating to anti-human trafficking organizations, such as: http://endhumantrafficking.org/donate/ that are dedicated to providing resources for victims.

Middle America or Donors: The GOP Must Decide Previous post
Don't Punish the Global Poor - Help Them Instead Next post