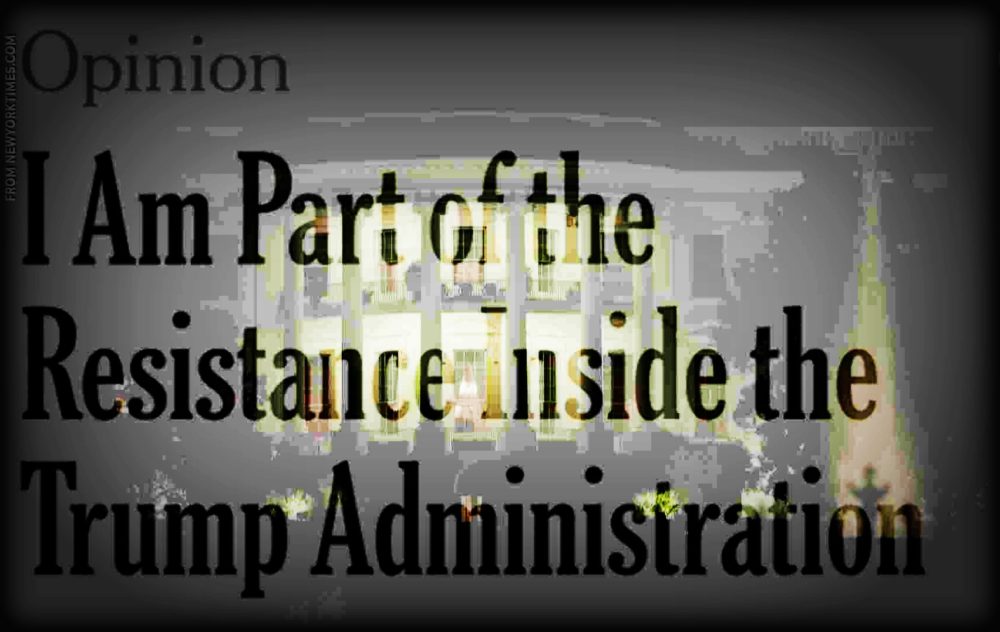 Hashim ArainOctober 31, 2018Comments Off on The Anonymous (Op-Ed) Resistance1

The anonymous op-ed also explains that President Trump doesn’t really support Republican or conservative ideas such as being an independent thinker and supporting the idea of an economic free market. The author states various administration officials have expressed disbelief at some of the president’s comments and actions regarding his policy proposals. The anonymous op-ed dives into detail about how Trump approaches the day to day duties of the presidency. “Meetings with him veer off topic and off the rails,” the author explains. “He engages in repetitive rants, and his impulsiveness results in half-baked, ill-informed and occasionally reckless decisions that have to be walked back.”

However, the op-ed notes that not all the stuff Trump has done is bad, citing that there’s been “effective deregulation, historic tax reform, and “a more robust military,” during Trump’s tenure in office. Since this op-ed came out, those both inside, as well as outside, the White House are working diligently to try and figure out whom exactly in the administration wrote the much-discussed piece. The identity of the author is only known to the NYT’s op-ed page editor Jim Dao, and a small number of people within the Times’.

The Vendetta here was the decision to run this piece ethical or not. The NYT has noted that it rarely publishes anonymous op-ed articles, but they explained that in this particular case, they gave the green light to publish this piece because they thought that the article provided an important perspective to its readers.

The Washington Post’s editorial page editor Fred Hiatt, claimed that the Post wouldn’t have ran the op-ed piece if the author contacted them first. Ruth Marcus, the Post’s deputy editorial page editor, wasn’t sure if she would’ve approved to run the piece either, but she noted that the author should’ve put their name on the article, due to the weight it carried. The Boston Globe, however, said that they would’ve published the op-ed after doing some careful vetting first because it had some newsworthy elements in it. They cited the newsworthy elements as when there was talk amongst those in the administration about using the power of the 25th Amendment, which would remove a president if they become unfit for carrying out the duties of the presidency.

The policy of this issue comes from journalistic ethics when it pertains to anonymous sources. According to the Society of Professional Journalists, or SPJ, reporters need to confirm information for a story as much as possible, before going to an unnamed source for information. SPJ also recommends that before journalists use an anonymous source, they should first try to figure out if the news value of the content that the source has, outweighs whatever the source is trying to accomplish, by putting the information out into the public.

Here are pros and cons to the anonymous op-ed piece by a Trump administration official:

Some policy options on this topic could be to have and practice some good journalistic ethics. One good practice of journalistic ethics, when it comes to dealing with anonymous sources is to make sure to carefully vet the source, by making sure that the information that they are disclosing is credible and factual.

There will always be a passionate debate about whether publishing this article from a senior Trump administration official was a good decision for the NYT or not. I believe that it was a good thing for the New York Times to publish this anonymous op-ed piece, mainly because it had a newsworthy value to it. This piece also gave a unique inside perspective on the inner workings of the Trump Administration, and this particular administration official’s thoughts, along with their colleague’s thoughts, on President Trump’s leadership style.