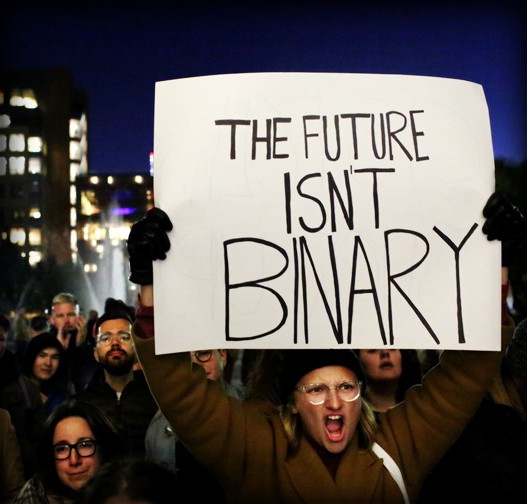 On October 21, 2018, the New York Times released an article discussing a memo released by the Department of Health and Human Services, or DHSS, which wishes to remove Obama era Title IX guidance on leaving the definition of sex to be defined on a case by case basis [1].

Under President Trump, the DHHS would like to provide a more narrow definition of sex, one which would restrict a person’s sexual identity to what corresponds with their respective genitalia at birth. If appropriate alterations of Title IX are made, this would invalidate the legal recognition of 1.4 million Americans who identify as transgender [2]. A court order that would have sweeping effects on regulations regarding bathrooms, locker rooms, sports, and, subsequently, the departments of Health and Human Services, Education, Justice, and Labor. There will undoubtedly be a deluge of litigation from pro-LGBTQI groups in the coming months while the fate of the transgender community now hangs in the balance.

Since his presidency’s incipience, Donald Trump has made it a major policy priority to curtail LGBTQI rights with his attempts to ban transgender persons from military service and to support discriminatory bathroom laws that reinforce the traditional gender binary standard. In a rather ironic fashion, the conservative orthodoxy is choosing to restrict individual freedoms for the sake of maintaining socio-cultural norms, a move which led to more conflict than congeniality.

Empirically, accounting for the multitude of genders that have arisen since the Obama administration’s fluid definition of gender under Title IX has made public policy in this area substantially more complex. Gender-based politics have been a boon to Democrats and an anathema to conservatives, depriving transgender persons of federal recognition will either remove a critical political tool for Democrats or galvanize them to turn out in droves to prevent the measure.

The vendetta here is bureaucratic authority vs. individual liberty. Conservatives have long been champions of personal liberty, defined as the freedom from the oppression and direction of the federal government, however, in the face of specific social issues, they appear to be reversing that position.

Congress is responsible for creating organic statutes that give life to federal agencies. Within this process, Congress usually delegates federal rulemaking authority to the agency in order diffuse responsibility and governance across a wider, more manageable network within the federal bureaucracy. Though agencies cannot act outside of congressional stipulations and the Constitution, the executive branch may delegate presidential authority to an agency [3].

President Trump plans to issue executive guidance in the Title IX definition of sex, exercising the similar authority the Obama administration used to expand the definition. If sex is defined as immutable at birth there will be uncertainty on how such regulation will affect the transexual individuals. If an individual undergoes the full procedure to transition between the sexes how will such guidance affect them if sex is immutable? The president is trying to make good on all of his campaign promises while his party maintains the lawmaking majority, but going after a critical progressive electorate this close to midterms may only embolden the opposition and cost the Trump presidency more than anticipated.

One advantage to this particular strategy is reducing the definition of sex to a simple binary would simplify much administrative and research-based processes in gathering data on individuals. However, if you juxtapose that outcome with the perennial outrage and litigation that this move will cause one might consider this a pyrrhic victory. There aren’t many outside entities which can legally counteract executive guidance, especially if there is no pushback from Congress or the federal agencies, which makes it appear more and more likely that this will come to pass despite public pressure.

The only way to reduce the effects of this action would be for individual states to swiftly pass legislation to recognize transgender individuals or to amend their constitutions to accommodate for the rule change. These changes, if implemented, would be instituted throughout the states on a partisan divide and transgender persons in states that support the executive’s decision would be in a major debacle. Parties opposing the president’s directive can (and most likely will) challenge the rulemaking authority of the appropriate federal agencies but if these cases are taken up by courts they will take months to produce any results if that.

Former White House counsel Don McGahn has just completed his tenure serving the president by making his priority the appoint of Supreme Court Justice Brett Kavanaugh and a battalion of judges for the federal bench. These appointments may make it difficult for any cases against the executive to proceed, let alone be successful. Losing federal recognition most likely won’t affect the citizenship of transgender persons, but they may face administrative complications if they have altered their sex to reflect their current state of being as opposed to their birth. The commitment to cause in this arena may be laudable by conservative supporters, but over time the utility of such policy may prove to be marginal or even moot, the subsequent conflict that will arise over the issuance of this guidance does not seem worth it for the conservative orthodoxy especially this close to midterms and prior to 2020. The ethics of this decision is far too complex to debate here but the philosophical and socio-cultural implications of sexual determination should and do transcend the world of politics.