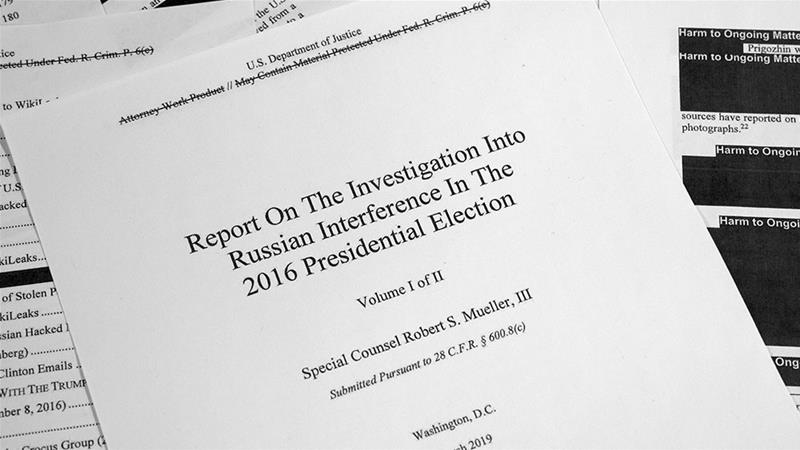 Hashim ArainApril 26, 2019Comments Off on The Report Is Released0

Since the Attorney General William Barr released his summary of Special Counsel Robert Mueller’s report on Russian interference into the 2016 election, lawmakers, especially Democrats have called for the full Mueller report to be released. Attorney General Barr said that he’ll release the report on April 18 and that he will leave some parts of the report redacted. Barr stated that he’d provide notes next to the parts that are blacked out, that will explain why that specific part is hidden from public view. One of the main reasons why Barr has to black out individual sections of the report is that its part of a federal rule that says that Justice Department officials can’t disclose grand-jury information to outsiders: This rule doesn’t have an exception for Congress. The only exception to this rule is if a judge issues an order that permits the information to be disclosed.

The public release of the report has been highly anticipated due to some Special Counsel associates speaking out in recent days about the full report was more damaging to President Trump than Barr’s summary indicated. The Special Counsel associates also noted that Barr didn’t correctly portray the findings of their investigation, in his initial review of it. Due to the concerns from some on Special Counsel Mueller’s team, it will be interesting to see if the narrative on the report will change, once lawmakers, the press, and the public read the whole thing.

Now that the Mueller report is publicly released, the question now is whether Congress will do anything legislatively, in light of these new revelations from the Mueller report. Impeachment seems to be a possibility for House Judiciary Committee Chairman Jerrold Nadler. The vendetta here is, is it worth it for Congress to pursue impeachment proceedings against President Trump, in light of these examples of possible obstruction of justice by him?

The report is divided into two volumes: volume one lays out how the Russians interfered in the 2016 election, and volume two examines the case that explains the obstruction of justice inquiry against President Trump during this investigation, and why Mueller couldn’t come to a conclusion on that. The main takeaways from the Mueller report are that it thoroughly lays out what went on between Trump campaign associates and Russian operatives during the 2016 campaign. The report points out that collusion isn’t a legal term, and that Mueller was looking for instances of coordination between the Trump campaign and the Russians. The report also lays out quite a few examples of President Trump trying to interfere with this investigation, and why Special Counsel Mueller couldn’t come up with enough evidence that Trump obstructed justice. According to the report the meetings between the Russian Ambassador Sergei Kislyak and Trump campaign officials weren’t considered unusual behavior by either party because the conversations between the two were “brief, public, and non-substantive.”

The report also says that Mueller was able to find quite a few connections between Russian government associates and Trump campaign associates, but he noted that he couldn’t come up with a sufficient amount to bring a criminal campaign finance charge against the Trump campaign. This finding occurred as the Russians were carrying out their disinformation campaign on social media during the 2016 campaign. Mueller also found several instances where President Trump tried to interfere with the Special Counsel’s investigation.

The report notes that President Trump pressured then-White House Counsel Donald McGahn by wanting him to order the Deputy Attorney General Rod Rosenstein to fire Mueller. McGahn didn’t go through with this request. Mueller’s team also noted that Trump likely fired then FBI Director James Comey, because Comey didn’t comply with Trump’s request that Comey says that he’s not under investigation. These are only a couple of quite a few examples where this could be considered obstruction of justice by Trump. The reason why Mueller couldn’t outright charge President Trump with obstruction of justice by trying to interfere with his investigation is that the Justice Department guidelines which say that a sitting president can’t be charged with a crime, while in office.

Mueller left the obstruction of justice question up to Congress. Mueller gathered all of the evidence that he had on this section of the investigation, and he specified in the report that unlike him, Congress has the power to investigate the obstruction of justice case further. Mueller gave Democrats the option to potentially start impeachment proceedings against President Trump over Mueller’s findings in this case. Some congressional Democrats think that impeachment is not an option for the party leadership to undertake, whereas, other Democrats want to see more information from the report and investigate this matter further.

Since Special Counsel Robert Mueller left the question of whether President Trump obstructed justice with his willingness to try to interfere with the Russia investigation, without a decision, I don’t think that Congress should pursue impeachment proceedings against Trump. I believe that with the 2020 presidential election a year away, it could be politically risky for Congress, specifically House Democrats, to implement impeachment hearings against President Trump. I believe that Trump supporters, who were already skeptical of this investigation, will be outraged if Congress pursues impeachment hearings against Trump. I also think that these hearings were they to happen would divide the country even more than it is now. There has been a notable decline in support on impeaching President Trump in the last month or so, particularly among Democrats.

Once again, I believe that not impeaching Trump is the best option here and that if people were dissatisfied with how he ran the country, then they have the chance to vote him out next year in 2020. I think if there was evidence of Trump campaign officials actively coordinating with Russia to win the 2016 election, and Trump was trying to obstruct an investigation of that, then maybe impeachment is an option. Since this wasn’t the case, I have a hard time believing that impeachment is the right way to go.

Here’s where you can read the Mueller Report in its entirety: https://graphics.reuters.com/USA-TRUMP-RUSSIA/010091HX27V/report.pdf