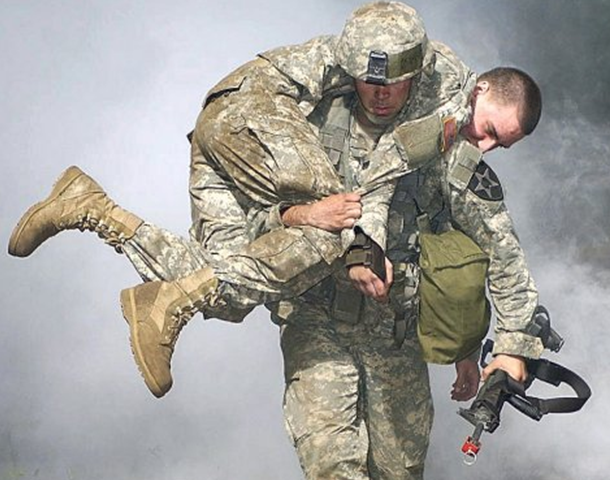 In the midst of family gatherings, outdoor barbeques, and spectacular fireworks, Americans everywhere celebrate the Fourth of July – the day the United States won the Revolutionary War, gained their freedom from the British Empire, and ultimately became a new emerging republic. But, throughout the decades, especially in the modern era, many complications have threatened this country, such as Pearl Harbor and 9/11. For each and every threat, however, America’s armed forces have protected that freedom, ensuring the survival and security of our nation. This task comes with a price – many soldiers, who are often deployed overseas, are exposed to a variety of diseases, and can become dangerously ill. The vendetta is how to protect the soldiers of the United States while utilizing organizations, and other resources, that already exist.

Despite the obvious dangers of war, service members are hospitalized “more often for infectious diseases than those who are wounded in combat.” [ref]”Military Infectious Diseases Research Program (MIDRP),” US Army Medical Research and Materiel Command, accessed July 4, 2015, http://mrmc.amedd.army.mil/index.cfm?pageid=medical_r_and_d.midrp.overview[/ref] Various diseases accounted for seventy-one percent of American battlefield hospital admissions in the 1990 Gulf War, and over ninety-five percent in 1993 Somalia. During the 2003 Iraqi War, cutaneous leishmaniasis, a disease transmitted by sand flies, affected 1,700 personnel, who had to be evacuated to the U.S. for treatment. [ref]”Military Infectious Diseases Research Program (MIDRP),” US Army Medical Research and Materiel Command, accessed July 4, 2015, http://mrmc.amedd.army.mil/index.cfm?pageid=medical_r_and_d.midrp.overview[/ref] Malaria remains to be the most militarily-relevant disease. During a two week mission in Liberia, forty-four percent of the 268 marines contracted malaria. [ref]Ibid.[/ref]Although no one died, forty marines were evacuated to the U.S. for treatment, while four developed severe symptoms.[ref]Ibid.[/ref] Although the U.S. has worked to provide medical treatment for the brave men and women, much of these efforts focus on treating, rather than preventing, various diseases. Focusing on prevention helps “maximize the military’s ability to accomplish its mission” around the world. [ref]Ibid.[/ref]  But developing preventive vaccines can be challenging. Making safe and effective vaccines is highly empirical – “compiling, verifying, and analyzing” clinical trial results require considerable time. [ref]Ibid.[/ref] Aside from these scientific challenges, there exists a requirement for “continued technology development to provide a robust pipeline of new technologies and materials to replace those that have failed.” [ref]Ibid.[/ref] Funding can also be difficult – the DoD determines which project is the most important and should receive the most attention. More specifically, “funding for advanced development of vaccines against infectious diseases is substantially less than funding for technology base research funding.”[ref] Stanley M. Lemon, Protecting Our Forces Improving Vaccine Acquisition and Availability in the U.S. Military, (Washington, D.C.: National Academy Press, 2002) 33.[/ref] This, in turn, may stall a technically feasible product.

Federal agencies and organizations, focusing on developing preventive measures, should collaborate. Working together can help make the most efficient use of funding and research efforts. While information is centralized, scientists divide the work, and repeat experiments, in hopes of quickly reaching a solid conclusion. Believing that HIV “remains a significant threat to service members deployed overseas and is a major source of regional instability in areas of US force protection,” collaborating has helped the U.S. Military HIV Research Program (MHRP) take a step closer in developing a preventive HIV vaccine. [ref]”HIV Vaccine Research,” MHRP, accessed July 4, 2015, http://www.hivresearch.org/research.php?ServiceID=5[/ref] Working with the National Institute of Allergy and Infectious Diseases (NIAID), MHRP completed the RV144 Thai HIV vaccine trial, which provided “scientific data to inform and improve vaccine development and HIV vaccine clinical trial design.” [ref]Ibid.[/ref]  MHRP, along with NIAID, will continue planning follow-up clinical studies using a similar vaccine regimen in southern Africa and Thailand targeting the most common HIV subtypes in those regions.[ref]Ibid.[/ref] Indeed, encouraging multiple collaborations can help expedite the research in the most resourceful manner.

Until vaccinations can be created and deemed safe, the DoD may want investigate other preventive measures. Navy Researcher Capt. Mark Lyles, after observing the large number of Gulf War veterans developing respiratory issues, tested the dust in Kuwait and Iraq in 2004, and found approximately 147 examples of bacteria – some which would cause life-threatening diseases like cystic fibrosis, and meningitis. [ref]Kelly Vlahos, “Navy Researcher vs. Bureaucracy over Toxic Dust,” The American Conservative, May 23, 2011, accessed July 4, 2015, http://www.theamericanconservative.com/2011/05/23/navy-researcher-vs-bureaucracy-over-toxic-dust[/ref] Lyles recommended “a (15-cent) dust nuisance mask” that would have “reduced the exposure 99 percent.”[ref]Ibid.[/ref] Expanding upon Lyles recommendation, investing in mere tools, ranging from dust masks, to insecticide, to even hand sanitizer, can help protect soldiers from even the slightest diseases. During training, the DoD may even consider providing workshops focusing on certain prevalent diseases, and their symptoms, in a specific region. If the soldier feels the slightest bit ill, he or she can immediately report to the army doctor before infecting anyone else.

Politicians may also want to consider revising Food and Drug Administration (FDA) guidelines, or that of any other agency, in hopes of speeding the process of licensing scientifically effective and safe vaccines. Manhattan Institute’s Peter Huber, for example, believes that current FDA “protocols…[are]now fifty years old,” which in effect, results in these “agencies develop[ing] some inertia. [The FDA] get very good at doing something they’ve done for a long time…”[ref]Peter Roff, “To Save Lives, Reform the FDA,” Fox News, January 18, 2014, accessed July 4, 2015, http://www.foxnews.com/opinion/2014/01/18/to-save-lives-reform-fda.html.[/ref] There are several proposed methods to reform the FDA, including adaptive licensing, where a clinical-development program is “restructured to allow for early approval of a new compound for a limited, typically high-risk population” based on valid clinical measures from smaller human studies.[ref]”If Everyone Hates the FDA Approval Process, Let’s Fix It,” Harvard Business Review, October 18, 2013, accessed July 4, 2015, https://hbr.org/2013/10/if-everyone-hates-the-fda-approval-process[/ref] Approval would be “revisited at several points” along the clinical-development pathway as longer-term outcomes are evaluated, and risks of treatment are better understood.[ref]Ibid.[/ref]

Check-out the opportunities, available by the U.S. Army Medical Department, to get involved and help protect America’s soldiers.  Not only does the organization provide some direction for small businesses to get involved, but students can intern as well.