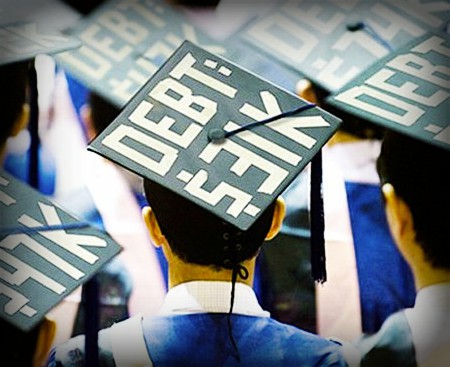 Earlier this year Betsy DeVos steered the Department of Education in an antithetical direction by siding with private student loan servicers against federal regulations aimed at helping over 30 million student borrowers, 11 million of which are behind on their payments [1].

Secretary DeVos, with the blessing of the Trump administration, has given student loan companies permission to refuse to answer information requests from individual states’ attorneys, under the impetus that they are undermining the Direct Loan Program. The secretary also determined that the states do not have standing to sue because such an action would supersede federal authority. This not only brings the executive branch in direct conflict with state authority but shows that the administration is willing to insulate private companies from civil liability as opposed to letting the judiciary solve this debacle.

States are trying to address the massive student loan debt epidemic that plagues the United States. Many borrowers have complained about the ferocity and lack of compunction that these companies have displayed when trying to collect. They have also noted possible deceptive practices when signing up borrowers, lack of transparency, and overcharging during the repayment process.

As a possible solution to this states have begun establishing requirements that all services must meet in order to operate within the state. These requirements vary from obtaining a license by the state’s board to being subjected to monthly, or annual, assessments, and providing special training for counselors who assist clients that are behind or in default.

In March of this year, the Education Department released a statement asserting that states did not have legal standing and reaffirming their support for the companies in question [2]. They posit that giving states the authority to subject these firms to peremptory licensing and other requirements would be subverting the federal mandate in choosing which firms service issued loans. In short, the government takes the position that states do not dictate the terms of operations for the companies that the Education Department chooses to do business. 25 attorneys general wrote a letter to DeVos requesting that she remove herself from state regulatory matters [3].

The vendetta here concerns executive supremacy vs states rights. The executive branch of government is denying states the right to make legal inquiries into firms that operate within their states and to make matters worse they are reinforcing the premise that state regulatory authority is to be ignored.

Earlier in August Secretary DeVos released an announcement that the department would be undoing the “gainful employment” rule on for-profit schools [4]. This Obama era regulation would deny certain colleges federal funding for grants and loans if they could not demonstrate that students graduating from these programs were able to attain long-term employment in a field where the skills they acquired were necessary. This rule would guarantee to fund for institutions such as the Corinthian Colleges which declared Chapter 11 bankruptcy in 2015 for allegedly defrauding students. The repeal of this rule is due to take effect on July 1, 2019. The attorneys general being blocked want to be able to provide these firms with a higher level of accountability than is currently allowed.

With the executive siding firmly against the states, this leaves the door open for serious legal contention heading into the near future which might result in a battle that doesn’t help borrowers at all. If the gainful employment rule is repealed this will only burgeon the states’ incentive to file against the plethora of ‘for profit’ colleges that will undoubtedly take advantage of federal funding. Secretary DeVos denying states attorneys general access to information from the companies may be allowing malfeasance to occur further harming borrowers. Removing the teeth from national law enforcement officers will only lead to more discord between the government, states, and the general public.

In order to defuse a potential legal powder keg, Secretary DeVos should commit with her decision to abolish the gainful employment rule. This will fairly limit the highly saturated field of ‘for profit’ schools that can operate while simultaneously reducing the number of potential borrowers. This will also keep the level of state litigation to a minimum.

In order to remain true with the conservative orthodoxy, the Trump administration should not interfere with state grievances against private companies while giving legal power back to the states. If the executive branch wants to exercise more control they should establish a department to supervise and service student loans themselves to reduce outsourcing and overreliance on private companies that lack transparency, public approval, and legal accountability.

The only potential legal argument that government has is the state’s licensing boards potentially subverting federal decisions (the privacy law violation was thrown out of court). In order to encourage mutual cooperation states can withdraw licensing requirements while maintaining their position on assessments in exchange for keeping the gainful employment rule in place. As we move closer to the midterm elections neither side has shown signs of backing down, the government is holding its ground and states are actively filing new charges against private loan servicers. Some finance wonks postulate that the student loan debt crisis could initiate another potential market eruption similar to what we faced a decade ago. Both the states and government need to reevaluate their purposes’ and come to the conclusion that America’s shareholders should be their first, second, and third concerns when dealing with private loan servicers. Only time will tell the fate of America’s student borrowers.

Do you believe that Betsy DeVos is unqualified for her position as the Secretary of Education? Sign up here!- https://petitions.moveon.org/sign/betsy-devos-resign

Have you lost faith in the Department of Education? Sign here- http://www.thomasmassie.com/sign-petition-support-abolishing-department-education/

Want to see what the Department of Education’s policy initiatives? Look here- https://www2.ed.gov/policy/landing.jhtml?src=pn

Want to see the student loan servicers used by the Department of Education? View them here- https://studentloans.gov/myDirectLoan/additionalInformation.action