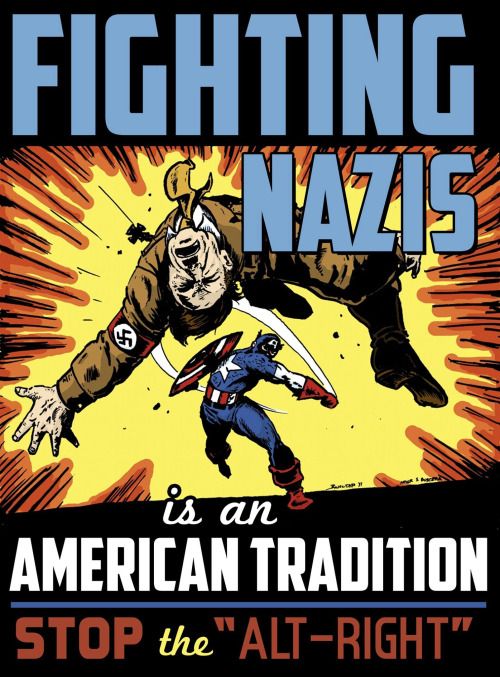 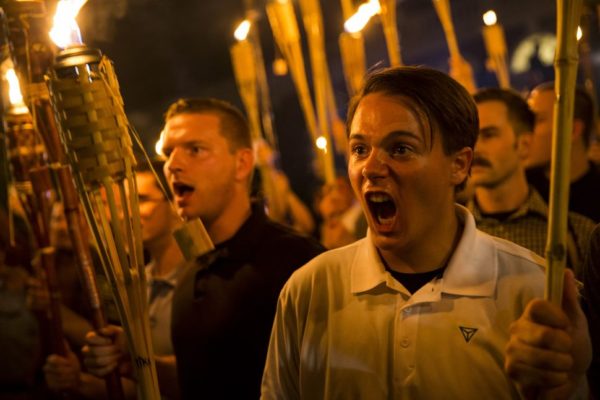 CHARLOTTESVILLE, USA – AUGUST 11: Neo Nazis, Alt-Right, and White Supremacists encircle and chant at counter protestors at the base of a statue of Thomas Jefferson after marching through the University of Virginia campus with torches in Charlottesville, Va., USA on August 11, 2017. (Photo by Samuel Corum/Anadolu Agency/Getty Images)

In April 2009, the Department of Homeland Security released a report highlighting the rekindled risk of right-wing extremist radicalization [1]. The report argues that right-wing extremist groups would be able to use the internet to target and radicalize more people than was possible in the 1990s and that due to the economic downturn, anxieties over the election of the first African American President, and fears of immigration and social change would drive people to embrace extremist ideology. The report goes on to identify returning military veterans as targets for such recruiting due to their combat training and other skills that might be useful in a future “race war”. The report, although three months newer than a DHS report on left-wing extremism [2], inevitably drew the ire of prominent conservatives in the media [3] and Congress as well as the leader of the American Legion, forcing newly minted Homeland Security Secretary Janet Napolitano to issue an apology to veterans groups for offending them. [4] By 2010, it was obvious that the Department had caved to political pressure as there were no analysts working on domestic terrorism. [5]

This utter rejection of facts and analysis because of the political nature of the term “right-wing extremists” isn’t the first time large portions of society have chosen to demonize facts because of politics. Unfortunately, rejecting facts doesn’t make them go away and in recent years while Republicans, including then-candidate Donald Trump, excoriated former President Obama for not using the words “radical islamic terrorism”, domestic right-wing terrorist incidents outnumbered Islamic terrorist incidents in the United States 115 to 63. [6] Despite this, and the fact that many of the individuals responsible for right-wing terrorist plots posted racist, misogynist, and/or islamophobic screeds, the Trump Administration has yet to even acknowledge a single domestic incident caused by a right-wing terrorist [5][6]. Which brings us to our vendetta: Facts v. Feelings. How do we as a country deal with a growing epidemic of far-right/alt-right violence when labeling such violence as right-wing offends the sensibilities of normal conservatives both in Washington and the media at large?

The answer, like with Islamic terrorism, begins at home. Like many of the ISIS-inspired domestic attacks that have captured the nation’s imagination, wannabe alt-right terrorists largely radicalize online. Except instead of connecting with radical imams online and reading ISIS propaganda they radicalize on websites that millions of American teenagers and young adults frequent like 4chan and Reddit, where they are introduced (or “redpilled” as the terminology goes) to subversive ideas that give answers to disaffected young conservatives that scapegoat feminism, civil rights, LGBT rights, as the cause of their particular social failures. Are you an average looking but not particularly talented male who struggles to find a date? It’s not you, there’s nothing you can do about it, you’re involuntarily celibate (incel) because “femoids” (alt-right term for women) only want “Chads” (alt right term for exceptionally good looking men) and use normal guys for money while cheating on them (or cucking as the term goes) with “Chad”. Can’t find a job? It’s because minorities are getting all the breaks between immigration and affirmative action. These radicalizing breadcrumbs laid for disaffected, largely white, men lead them down a path towards the alt-right and combined with the right amount of desperation and firepower leads to tragedy as seen with Elliot Rodger, Dylann Roof, or more recently at a Nashville Waffle House with Travis Reinking, and in Toronto with Alek Minasian.

So what are our options here? In short, quite limited. There are two paths we can go down:

In my eye, the only solution to this problem is to confront it head on, ignoring the growing incidence of right-wing domestic terrorism will only embolden its perpetrators and lead to more deaths. While the Justice Department under Attorney General Jeff Sessions is more content to actively monitor for “Black Identity Extremist” organizations that he couldn’t name [7] than right-wing extremist groups like sovereign citizens and the KKK or neo-Nazis, [7] and the current Administration is content to defund programs like Life After Hate [8] that aim to de-radicalize people involved in hate groups, it is our duty to demand our government take a more serious look at right-wing extremism.

If you also want to see our government change its ways and begin to take the threat from right-wing terrorists more seriously, it is on we, the people, to get involved. One way is to contact your Congressperson and Senators and demand action on domestic terrorism:

If you want to be more direct with your action, you can always support groups like Life After Hate, an organization in much need for help after the Administration cut a major part of their funding.

But perhaps the most direct action you can take is to look out for your friends and loved ones in danger of radicalizing. Have they become more openly misogynist in their opinions? Have they started saying things about other races, sexualities, or religions that seem bigoted? While you may feel uncomfortable confronting a longtime friend or family member about increasingly problematic beliefs, it could potentially prevent them from being the friend with racist views to turning into the next Dylann Roof. After all, before murdering nine church attendees in Charleston, South Carolina, his friends recalled him as making racist jokes and wearing the insignia from notorious white supremacist governments like Apartheid-era South Africa.  [9]